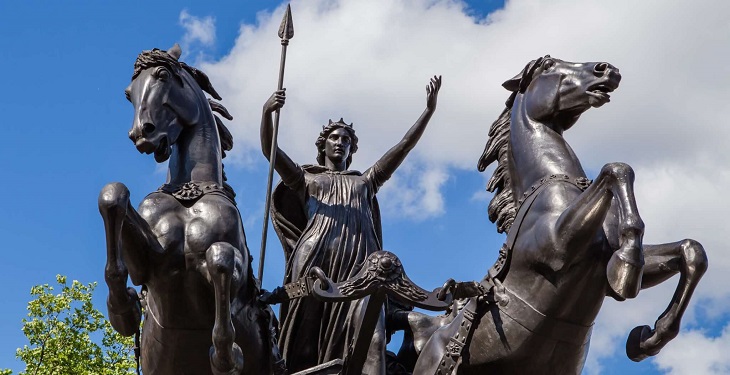 Synopsis
A renowned folk hero, Queen Boudicca was a Celtic woman who united Brittonic tribes against Roman rule in 60 A.D. Boudicca means "victory." A significant inspiration throughout the centuries,Boudicca, is considered an important figure who stood up to oppression and injustice.

Early life
Little is known about Boudicca’s early years. What is known comes from Roman historians Tacitus and Cassius Dio. It is believed she was born in 30 A.D., in Camulodunum (present-day Colchester), about 65 miles northeast of London.

Background of Boudicca's rebellion
At age 18, she married Prasutagas, king of the Iceni tribe. When Roman Emperor Claudius conquered southern England in 43 A.D. most of the Celtic tribes were forced to surrender. However, the Romans allowed the Iceni to remain independent, but as a protectorate of Rome.

Prasutagus died in 60 A.D. with no male heir. His will stated half his kingdom would go to his daughters and half would go to Roman Emperor Nero. Prasutagus’ hoped that the gesture would ensure protection for his family. However, the local Roman government saw this as an opportunity to consolidate their control of Briton. The commanders ordered the Roman army in to bring the region to its knees.

Punishment for Boudicca and Her Daughters
Accounts differ as to why the local Roman commanders took such action. Some say that the Roman governor, Gaius Suetonius Paullinus, was tired of the constant rebellions by the Celtic tribes. Others believe Prasutagus had left large debts to Rome and when his wife, Boudicca, couldn’t repay them, the Romans made an example of her by stripping her naked and beating her in public. Some historical accounts also indicate Boudicca’s daughters were raped by Roman soldiers. Other tribal leaders within the kingdom were subjected to similar humiliations. In their crackdown of the tribes, the Romans imposed heavy taxes and turned grants into loans demanding payment. They also took tribal land and tried to suppress Celtic religious ceremonies.

Boudicca’s Battles
During this time, Suetonius was away on a military campaign in North Wales. Boudicca saw her opportunity to take action. She secretly met with leaders of other tribes encouraging them to stand up against the Romans. It is believed she formed an army of up to 100,000 warriors.

Like other Celtic women, Boudicca was trained as a warrior in fighting techniques and the use of weapons. Though she lacked experience, she seemed to have a brilliant military mind. The Roman writer Cassius Dio described Boudicca as: “very tall. Her eyes seemed to stab you. Her voice was harsh and loud. Her thick, reddish-brown hair flung down below her waist. She always wore a great golden torc around her neck and a flowing tartan cloak fastened with a brooch.”

Boudicca’s goal was not just revenge for herself and her daughters, but to purge Briton of Roman rule. She devised a plan for her army to attack Rome’s three major cities. Her first target was the city of her birth, Camulodunum. It was also the capital of Roman Briton and a symbol of its rule. With her massive force, Boudicca and the rebel army had no trouble destroying the city and slaughtering its inhabitants.

Suetonius heard about the rebellion and quickly left his campaign in Whales. He raced to Londinium (London), a small, but important financial centre in Briton. Arriving with only a small force, Suetonius soon discovered he did not have the numbers to defend the city and ordered it evacuated. The rebels quickly descended on the panicked town and ruthlessly sacked it with blinding speed. They then moved on to Verulamium (St. Albans) sweeping away any resistance given and burning the city. In very short order, Boudicca and her forces had succeeded in destroying three of Roman Britannia’s most important cities, including its capital. It is estimated that the Boudicca’s forces massacred over 80,000 Roman soldiers and civilians during their rampage. One more victory, the rebels believed, would bring an end to Roman rule.

Death of Queen Boudicca
The Romans were embarrassed. Their highly trained army had been defeated by a band of barbarian rebels led by a woman. Suetonius, determined not to have that be his legacy, gathered forces from neighbouring cities to crush the rebellion. The location of the final battle is not known but believed to have occurred in West Midlands, on Watling Street, a large road that traversed Briton from present-day Canterbury to Whales.

As word of Boudicca’s victories spread, forces from other villages and towns joined her army. Suetonius knew his Roman army possessed superior tactics, training, and weapons, but with his inferior numbers, he chose to conduct the final battle in a narrow field where the rebels could not attack him in full force.

Boudicca’s army marched toward the Roman defences. With their javelins, the Romans succeeded in fending off the first attack, inflicting many casualties. When the second wave came, the Romans held firm behind their wall of shields, stabbing the oncoming Britons with their short swords. The rebels were finding their tactics inferior to the Roman soldiers who quickly alternated from defensive to offensive positioning and cut the rebel forces to pieces. Boudicca had no choice but to retreat.

The rebels had been so certain of victory, they brought their families with them on the campaign. Positioned around the battlefield in their wagons, the encampment now blocked the rebel army’s escape. They were trapped. Exact numbers are not known, but it is estimated that over 80,000 Briton rebels were killed and only 400 Roman soldiers died.

One of those causalities was Boudicca, though the exact cause of her death isn’t known. She either died from her wounds or took poison with her daughters to avoid capture. After the battle, the remaining rebel forces and their families were seized and taken into slavery. The great tragedy is Boudicca was possibly one victory away from ridding Briton of Roman rule and changing the course of history. Instead, the Romans remained in Briton for another 350 years.

The rebellion shook the Roman Empire to its core. From then on, they treated the Britons with more respect and fairness.

Legacy
Boudicca’s legacy is one of bravery in facing insurmountable odds. Her actions challenged Rome’s arrogance and complacency in ruling Briton. Emperor Nero briefly contemplated leaving Briton. Instead, he replaced Suetonius Paullinus with a more conciliatory governor, Publius Oetronius Trupilianus. The Romans also spent years building forts and increasing security in Briton. Boudicca’s story and legacy were recorded by Roman historian Tacticus, whose father-in-law, Agricola, is said to have fought in Suetonius Paullinus’ army and later served as governor of Briton between 77 and 85 A.D. Few of Tacticus’ writings survived the fall of the Roman Empire, but some were found in monastery libraries in the 14th century.

The stories were printed and carried across Europe during the Renaissance. Queen Elizabeth is said to have read the accounts and was inspired to conduct her reign with the same level of determination and strength when dealing with foreign powers, such as Spain. Queen Victoria was also moved by Boudicca’s story and a statue of Boudicca was placed on the north end of Westminster Bridge, near the Houses of Parliament. Both the names “Victoria” and “Boudicca” mean victory.

In more recent times, Boudicca’s story has been portrayed in books, music and film. Comic book character Boodikka, a member of the Green Lantern Corps from D.C. Comics, is named after Boudicca. Several films were made, including a 2003 television series titled Boudica from the United Kingdom and a 2006 documentary from the History Channel entitled Warrior Queen Boudica.