16 to walk gallows for Nusrat murder 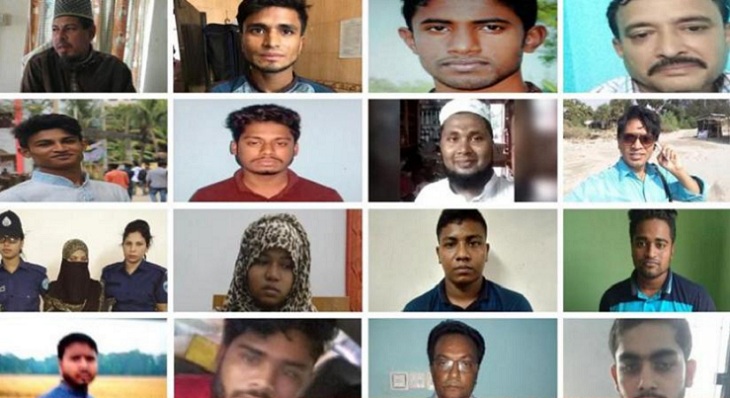 A fast track court here today sentenced all 16 accused to death and fined them Taka one lakh each in the case lodged over murder of Sonagazi madrasa student Nusrat Jahan Rafi.

Judge Md Mamunur Rashed of Feni Women and Child Repression Prevention Tribunal pronounced the judgement at the jam-packed courtroom at around 11.20 am in presence of all the 16 convicts.

“The accused deserve severe punishment for their boastful behaviour towards Nusrat as it certainly would leave humanity ashamed. The world now aware of her (Nusrat) fight to protect her dignity, thanks to the media,” the court said in its observation.

Earlier, the prison authority brought the accused to court at around 10.45 am and police taken them to courtroom after 11am. Judge Md Mamunur Rashed started reading out the judgement at 11.10am.

BSS correspondent present at the courtroom said the most of accused, mainly the young ones were looked tensed the whole time, while their relatives were crying their hearts out. But, the main perpetrator behind the heinous crime SM Siraj Uddoula looked expressionless.

But, as the court sentenced all of them to death, the convicts broke into tears, some of them were cursing the state counsels and plaintiff.

“It has now been proved again that there is no scope of getting away after committing such crimes,” Hafez Ahammed said.

Nusrat’s brother and plaintiff of the case Mahmudul Hasan Noman expressed gratitude to Prime Minister Sheikh Hasina, saying for her monitoring, they have been able to get the justice so fast.

Attorney General Mahbubey Alam in his initial reaction expressed satisfaction over the judgement and quick disposal of the case. The chief state counsel said he would take initiative to hold hearing swiftly once the appeal matter comes to High Court.

The tribunal on September 30 set today to pronounce the verdict as both the state and defence concluded their arguments on that day.

Nusrat, a student of Soniagazi Islamia Senior Fazil Madrasa, was set on fire on April 6, 2019, by stooges of madrasa principal SM Siraj Uddoula as she refused to withdraw a case filed against the crooked teacher for sexual harassment. Nusrat succumbed to her injuries at Dhaka Medical College Hospital on April 10.

The tribunal on July 10 took the charge sheet into cognizance and on July 20 framed charges in the case.

The court examined 87 witnesses on 62 hearing dates from June 27 to September 30.

Nusrat had accused Siraj Uddoula of harassing her sexually on March 27, while she was exposed to his extreme vengeance on April 6 when she went to the madrasa to appear in Alim examination.

A group of masked youths, later found to be the cronies of the disgraced principal, took Nusrat to the rooftop of the madrasa and set her on fire after tying her with her scarf.