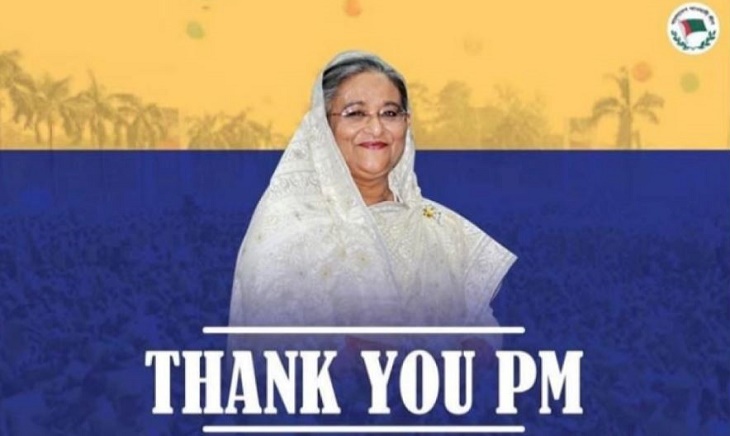 'Thank you, PM', a campaign to celebrate the birthday of Prime Minister Sheikh Hasina, has been launched once more, inviting everyone to take part in the campaign by capturing and sending a thank-note video to the premier.

Marking her birthday on September 28, the ruling Awami League and its associate bodies will organize an array of programmes.

In addition to those events, the 'Thank You, PM' campaign featured by the ALBD web team, is celebrating both occasions - the birthday of the prime minister and the 50th birth anniversary of Bangladesh, Tonmoy Ahmed, coordinator of the party's web team, told BSS.

According to the format decided by the ALBD web team, each video has to begin with the name, district, and organization of the sender stated by himself or herself, said Tonmoy clarifying that original videos (without any editing) be sent.

One can send single or multiple videos at [email protected] Google Drive or One Drive links can be sent by enabling the options such as 'sharable', 'open', or 'anyone can get access'.

Videos will end with 'Thank you, honorable Prime Minister Sheikh Hasina', he added.

"With Sheikh Hasina in charge of the country, this birth anniversary, coinciding the 50th year of the country's independence, would surely be marked by streams of celebration by different associate bodies," Tonmoy said.

He said: "Amidst such streams of events, our initiative is devised to provide general people with an opportunity to get their wishes on our party leader showcased from the party's platform."

In addition, he said, another aim is to compile and later project from party-aligned platforms - how the works by the prime minister changed the course of progress, given that the premier, unlike others, has envisaged and put in place an array of initiatives that uplifted lives of millions of people.

"We expect that the people of the country will express their gratitude to Father of the Nation Bangabandhu Sheikh Mujibur Rahman's daughter through video messages as they did before. The videos would be featured on the verified Facebook page of the party. Like the previous year, the initiative is here once more," he said.

"Sheikh Hasina's contribution to different infrastructural projects, vaccination against the coronavirus, electricity supply, habitation projects, and other initiatives transforming communities can also be featured in these videos," said Tonmoy.

The deadline for sending the videos is September 20, 2021.

"September 28 is the birthday of the Prime Minister. It's the people who reaped the benefit of Awami League's stay in power for over a decade. They will celebrate the day with due importance and utmost gratitude," he added.