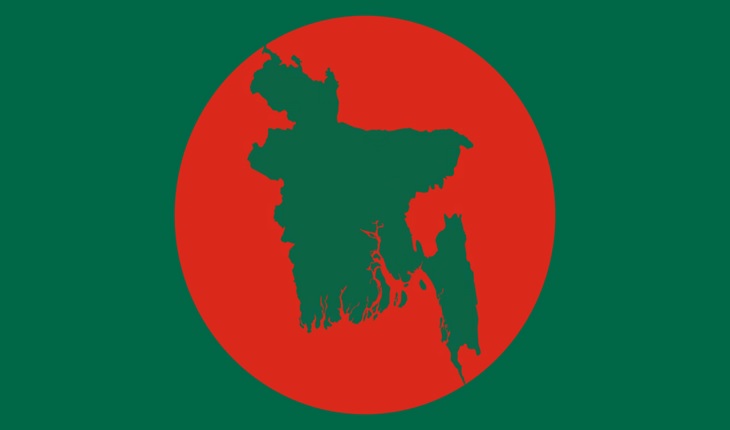 The nation is celebrating the 50 years of victory, the most precious moment of the Bangalee people, today as the country was liberated from the Pakistani occupation forces on the day in 1971 after a nine-month-long bloodstained war.

On December 16 in 1971, Bangladesh was born as an independent country under the leadership of Father of the Nation Bangabandhu Sheikh Mujibur Rahman at the cost of supreme sacrifice of three million people and the honour of 200000 women.

The celebration of the Victory Day this year has added a new dimension as the day is set to be celebrated coinciding with the two giant celebrations -birth centenary of Father of the Nation Bangabandhu Sheikh Mujibur Rahman and golden jubilee of the country's independence.

Marking the two celebrations, Father of the Nation Bangabandhu Sheikh Mujibur Rahman's Birth Centenary Celebration National Implementation Committee has taken up a two-day special programme titled 'the Great Hero of the Great Victory' at the South Plaza of the Jatiya Sangsad in the city from December 16 to 17.

At the beginning of the first day's programme, Prime Minister Sheikh Hasina is expected to administer an oath to the nation at 4:30pm today as part of the celebrations.

At the second session of the programme, a discussion will be held with Prime Minister Sheikh Hasina in the chair.

President M Abdul Hamid will be present as the chief guest while his Indian counterpart Ram Nath Kovind will be the guest of honour at the discussion.

On the occasion, Bangabandhu's younger daughter Sheikh Rehana will present the "Sraddha Smarak- Mujib Chironton" to the guest of honour.

On December 17, a cultural function will be organised on the Sangsad premises around 5:30pm.

All programmes marking the giant celebrations will be held maintaining the health guidelines in face of the global pandemic COVID-19.

Today's programmes taken at national levels marking the 'Victory Day' began with placing of wreaths at the monuments to pay homage to martyrs, hoisting of the national flags atop all government, semi- government and private offices as well as offices of autonomous bodies across the country.

The victory day's programmes also include decorating city streets with miniature national flags and colourful festoons, and illumination of important buildings and establishments, roads and street islands at night.

Leaders of Awami League, members of Bir Sreshthos, wounded freedom fighters and Bir Muktijoddhas, foreign diplomats, and different political and social organisations and people from all walks of life are paying tributes to the martyrs of the Liberation War on Victory Day.

Contingents of Bangladesh Army, Navy and Air Force as well as Freedom Fighters, Para-military forces, law enforcement agencies and various ministries of the government are participating in the parade starting at the National Parade Square in the city at 10.30am.

President Abdul Hamid will be present there, and inspect the parade and take salute on the occasion while Prime Minister Sheikh Hasina will witness the parade.

Besides, a discussion on the best utilization of digital technology and upholding the spirit of the Liberation War in building Sonar Bangla as dreamt by Father of the Nation Bangabandhu Sheikh Mujibur Rahman will be held on the occasion.

Receptions will be accorded to valiant freedom fighters and family members of martyrs in the metropolis, districts and upazilas across the country.

Following the health guidelines, special prayers will be offered at mosques and other places of worship, seeking eternal peace of the departed souls of the martyrs of the Liberation War and peace, progress and prosperity of the country.

All children parks and museum across the country will remain open for all and Liberation War based movies will be screened at the cinema halls at free of cost on the day.

A poster exhibition and historical documentary screening will be held at Swadhinata Stambha and Underground Museum at the Suhrawardy Udyan in the city.

Similar programmes will be taken at district and upazila levels as well as Bangladesh missions abroad, highlighting the significance of the day.

The day is a public holiday.

The state-owned and private televisions and radios are broadcasting special programmes highlighting the Liberation War.

Marking the day, improved diets will be served to inmates of jails, hospitals, orphanages and vagrant homes across the country.

Marking the day, ruling AL hoisted national and party flags at the central party office, Bangabandhu Bhaban and all the party offices across the country with the sunrise.

The party also placed wreath at the national memorial at Savar. It also laid wreath at the portrait of Father of the Nation Bangabandhu Sheikh Mujibur Rahman on the premises of historic Bangabandhu Bhaban at Dhanmondi 32 in the city.

A delegation of AL will pay tribute to Bangabandhu placing wreath at his grave at Tungipara in Gopalganj.

Besides, AL leaders and activists will participate in the oath-taking ceremony which will be administered by Prime Minister Sheikh Hasina at South Plaza of the Jatiya Sangsad at 4:30pm.

The party will also bring out a victory rally from Suhrawardy Udyan marking the golden jubilee of the victory at 2:30pm on December 18, which will end at the historic Bangabandhu Bhaban in the city's Dhanmondi 32 no road.

Party units and its associate bodies across the country will also bring out 'Victory Day' rallies keeping similarity with the AL's central programmes.

Awami League general Secretary Obaidul Quader has called upon the people including the party leaders, activists and supporters to celebrate the day marking golden jubilee of the country's independence, maintaining the health guidelines.