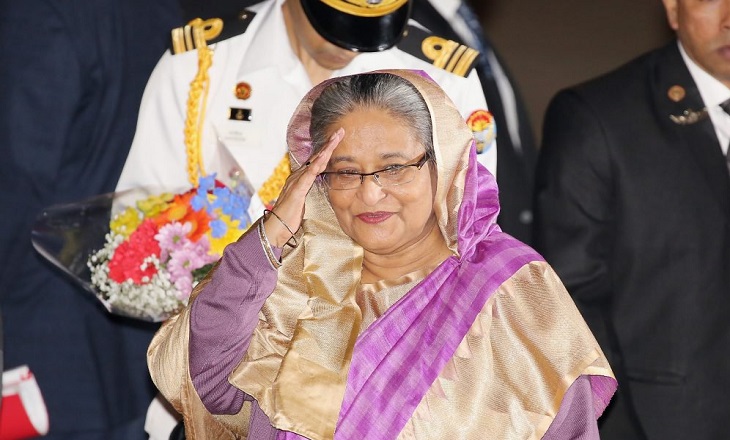 Prime Minister and Awami League President Sheikh Hasina today expressed heartfelt gratitude to the countrymen for her party’s absolute victory in the December 30 national elections, pledging that she will continue to serve them for their well being.

“Serving the people is a huge task and I will continue to do it as long as I remain alive,” she said when different organisations and individuals greeted her at the Gono Bhaban in Dhaka this afternoon on the occasion of her party’s landslide victory in the 11th parliamentary polls held on Sunday (December 30) .

“My responsibility towards the country and people has increased further after our reelection,” she said and added that she will continue to perform her duties to fulfill the hopes and aspirations of the people.

Officials of Bangladesh Scouts and Girl Guides Association and high civil and military officials as well as retired officials greeted the prime minister by presenting bouquets to her.

Sheikh Hasina said Awami League’s landslide triumph in Sunday’s election was the outcome of coordinated efforts of the people from all classes and professions.

“The people from all walks of life worked heart and soul for the win of our party and for this, I express my sincere gratitude to them,” she added.

The premier sought cooperation of all to establish poverty and hunger-free ‘Sonar Bangla’ as dreamt by the Father of the Nation.

Sheikh Hasina reiterated her firm stance against terrorism, militancy and drugs, saying there will be no room for such menaces on the soil of Bangladesh.

The Awami League president also thanked the organisations and individuals who came to the Gono Bhaban to congratulate her following her party’s landslide victory in the polls.