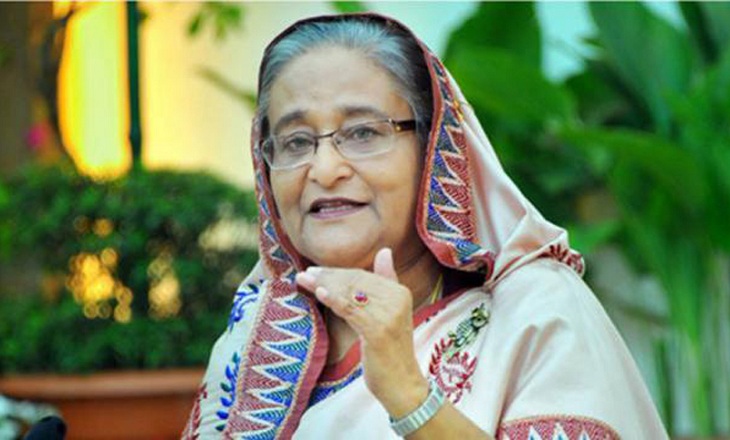 Prime Minister Sheikh Hasina today said from the very beginning BNP had an evil intention to make the last general election questionable despite their participation in the polls.

“Though BNP had taken part in the election, they always had an intention to make the polls questionable as their popularity dropped into the lowest level and had no chance to win the electoral race,” she said.

The prime minister said this while addressing a reception accorded to her by expatriate Bangladeshi nationals here last night.

The prime minister in her maiden overseas visit after assuming office last month for the fourth time arrived in Munich on Thursday to attend a security conference.

Pointing out the reasons of colossal defeat of BNP in the last general election, the prime minister said BNP won only 28 seats in the 2008 general election and none had raised question about the acceptance of that election.

“How they expect better results than 2008 even after committing mayhem in the name of political movement over the last few years,” she said adding that people didn’t forget the terrorist activities of BNP which they unlashed across the country in 2013, 2014 and 2015.

BNP was not sincere to win the election as it sensed it’s defeat, which was the reality, she said.

Moreover, BNP fielded many Jamaat-e-Islami leaders giving them ‘Paddy Sheaf’, the electoral symbol of BNP, which was also a major cause of losing public support in the election, Sheikh Hasina said.

Sheikh Hasina said BNP could not make it clear to the people who would be their prime minister and who form the government if they win the election.

Sheikh Hasina also blamed BNP’s nomination trade as one of the major reason for their debacle in the election saying BNP had given nomination to at least three or more persons in every constituency.

BNP was more critical about Awami League in the election campaign instead of making people aware of their future plan. But, people of Bangladesh better know what Awami League have done for them, the prime minister said.

Sheikh Hasina said Awami League has given people better life. During the tenure of Awami League, monthly income of the people has been increased and they are living in peace. Their living standard is getting improved day by day, which people can understand.

On the other hand, the prime minister said, “We have given importance on our future plan, giving focus on how we want to see our country in future. Our past development works are very much visible to the people and we have furnished our future plan in our election manifesto.”

Awami League has earned independence and established the people’s right to speak in mother tongue, the premier said, adding Bangladesh would go ahead and none would be able to dominate it as Awami League is now working for economic emancipation of the country.

Now, BNP and their ally Okiyo Front are trying to make the December 30 election questionable and filed cases at seven places, the prime minister said, adding as per election law they can file case in the election tribunal and Awami has no objection to it.

The corruption of BNP leaders are being exposed slowly by US intelligence and Canada and their documents are the main evidences of the lawsuits filed against Khaleda Zia and her son,” she said.

Sheikh Hasina said, “Expatriate Bangladeshis were always with us in all movements and helped us in the struggle to establish political rights and country’s economic progress.”

She also recalled the role of expatriates in the protest against the brutal killing of Bangabandhu Sheikh Mujibur Rahman.

The prime minister extended her gratitude to the expatriates for their dedicated service to brighten the positive image of Bangladesh abroad and build up positive opinion in country’s interests.

Sheikh Hasina said people of every class and section cast their vote spontaneously for Awami League in the last general election that led the party to its landslide victory.

Rural and urban people, business community, youths and women cast their vote for Awami League with a hope to take the country forward to prosperity as dreamt by Father of the Nation Bangabandhu Sheikh Mujibur Rahman.

People have much expectation that the country would gain development if Awami League remains in power and everybody would enjoy the benefit of the development, she said.

About the participation of BNP in the last polls under the banner of Oikyo Front, the prime minister said as the head of the government she sat with as many as 70 political parties for dialogue.

The prime minister said the highest number of political parties of the country took part in the election and over 80 percent voters have exercised their franchise which was never seen before.

Sheikh Hasina said people didn’t cast their vote for BNP as their role in unbridled corruption has been exposed. They ruled the country for many years after the brutal killing of Bangabandhu, but could give nothing to the people except killing, military coups, misrule, corruption, money laundering and nepotism.

Sheikh Hasina said the military rulers after 1975 could give nothing to the people except murder of Awami League leaders and workers, coups in the armed forces, misrule, corruption, money laundering and nepotism.

Pointing out the unbridled corruption of BNP leaders during their rule, the prime minister said it was not Awami League government, but US intelligence unearthed their corruption.

Sheikh Hasina said Bangladesh would prosper as Bangabandhu had nourished
his dream with this country.

“As the daughter of Bangabandhu I know his vision and plan to build Bangladesh as a prosperous nation,” she said.

The prime minister thanked the expatriates who were in the country during election time to take part in the campaign in favor of Awami League candidates, she said.

Sheikh Hasina urged the expatriate nationals to come forward with investment in the Special Economic Zones saying there would have special offer for the expatriates.

Prime Minister off to Germany