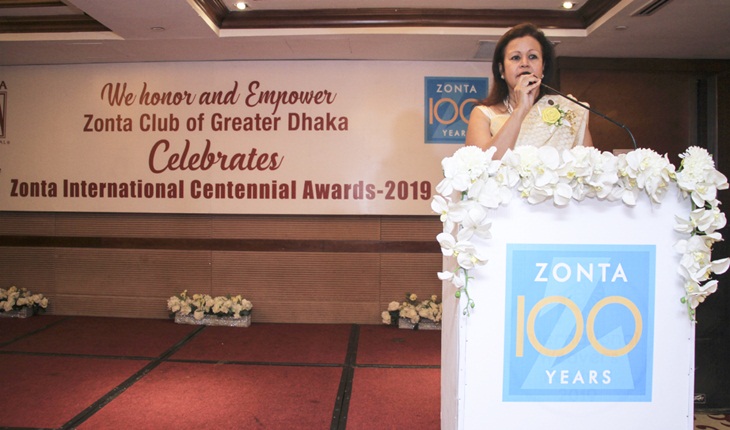 The Zonta Club of Greater Dhaka on Friday honoured three individuals in recognition of their outstanding contributions to women empowerment.

While speaking as the chief guest, Dilruba Ahmed said, “When a woman stands for herself, she actually stands for all women.”

President of Zonta Club of Greater Dhaka Nehreen Rahman lauded the awardees as well as the members of the club for joining the celebrations of 100 years of Zonta International.

“Our vision is equality and that’s why this year’s theme is ‘Balance for Better’,” she said.

The President hoped that the members of all the wings of Zonta International in the country will continue to work for women empowerment.

Secretary of Zonta Club of Greater Dhaka Sonya Panni, who moderated the programme, gave an overview of the club’s activities saying that the club appreciates those who stand beside it to ensure and promote the rights of women.

At the function, Bangladeshi world traveller and flag-bearer Najmun Nahar was declared ‘Ambassador of Zonta Club’.

Among others, Treasurer of Zonta Club of Greater Dhaka Tehmina Enayet was present at the event.

Zonta International is a non-partisan international organisation founded in 1919 in Buffalo, New York. Currently, it has 30,000 members in 63 countries.