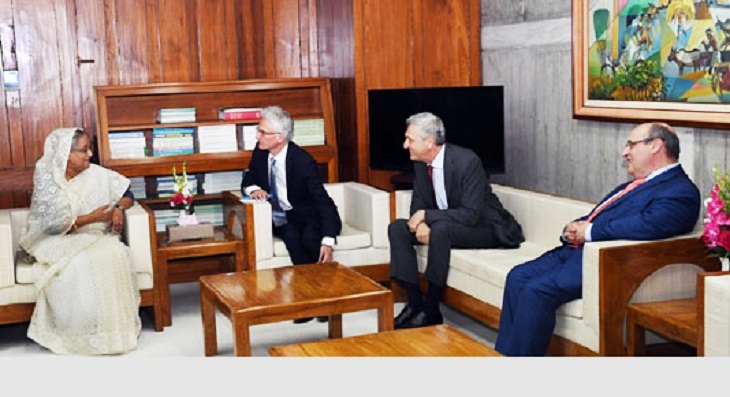 Prime minister Sheikh Hasina on Wednesday called upon the international organisations including the United Nations (UN) to play a strong role in repatriation of the Rohingya people from Bangladesh.

“Giving shelter to over one million forcibly displaced Rohingyas is a huge burden for us and how long we will bear the load? They must go back to their homeland of Myanma’s Rakhaine state,” she said.

The premier added: “So we want you to play a more proactive role in this regard.”

The prime minister said this when United Nations High Commissioner for Refugees Pilippo Gandhi, UN Under Secretary General (Human Affairs) Mark Lowcock and Director General of International Organisation for Migration (IOM) Antonio Vitorino paid a joint courtesy call on her at her Jatiya Sangsad office in Dhaka in the evening.

Sheikh Hasina thanked the UN organisations as well as other international bodies and different countries for extending their support to Bangladesh on the Rohingya issue.

She said the local people are suffering a lot due to exodus of over one million Rohingyas into Cox’s Bazar. “Their cultivable land and even local forest resources are being ruined for the presence of the Rohingyas,” she said.

Sheikh Hasina warned of disasters, saying natural calamity, cyclone and landslide in the hill areas can take place at any time particularly in the coming monsoon for which the Rohingyas may be affected seriously.

“So, it’s better to shift them from this place, otherwise the risk factors will be high,” she added.

The premier, however, mentioned that the government is developing an island named Bhashanchar where more than 100,000 Rohingyas will be shifted with better living and other facilities.

About education of the Rohingya children, the prime minister said the teachers who entered Bangladesh with them are providing informal education to the children.

In reply, the three top UN officials highly appreciated the prime minister for her humanitarian gesture of giving shelter over one million Rohingyas in Bangladesh.

Pointing out their visit to Myanmar, they informed the prime minister that they sought access of the UNDP and UNHCR to Myanmar on the repatriation of Rohingyas.

“We’re committed to continuing help Bangladesh on the Rohingya issue, especially providing education for the Rohingya children,” they said.

The UN officials said they held talks and signed agreements with the Myanmar authorities on the Rohingya repatriation. But the progress is very slow in this regard, they remarked.

PM Hasina at Banani to see off Zayan forever