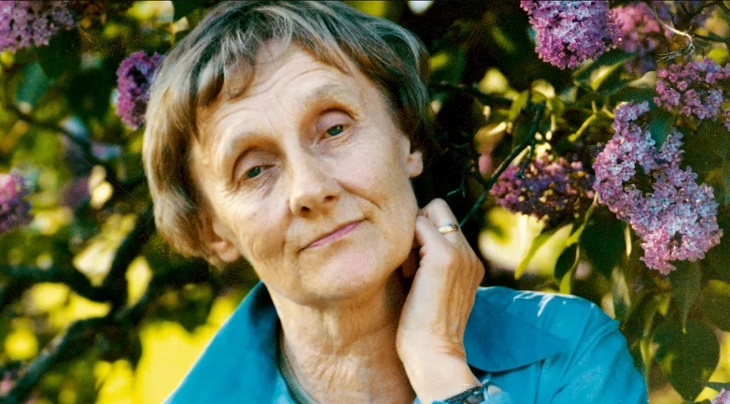 From Astrid to Lindgren and the sequel to From Astrid to Lindgren, a synopsis by Kurt Peter Larsen & Vladimir Oravsky, may in part or in entirety be copied or otherwise be reproduced, electronically, mechanically, in analog or digital form and digitally, or telepathically or through other as yet unknown means, on paper, plastic, tape, or other known or future substance, in Braille, in sound or image form; it may also be set to music, dramatized, be filmed or put on video, be animated or transformed to ballet, mime presentation, or musical, oratorio, or opera. It may also be used in relation to advertising, for purposes of agitation and propaganda. However, a written agreement with the copyright holder (© Vladimir Oravsky) concerning the abovementioned is required.

Outside the window a light drizzle was falling that morning in October. According to the clock on the wall above the teacher’s platform, it would soon be lunchtime. In the third row sat Astrid, typing on the typewriter in time to Miss Rasmusson’s shoes that beat against the naked wooden floor.

“Stop! Three hundred words a minute! Very good, Miss Ericsson!” ascertained the stout teacher looking at the big watch she held in her hand.
Astrid looked up in surprise.
“Thanks, but how do you know, Miss … ?”
“The spaces. A person hasn’t been teaching at Bar-Lock for over thirty years for nothing!”
“Evidently not,” Astrid could ascertain.
“Quite certainly not! Again!” ordered Miss Rasmusson in a sharp voice. She was a stern teacher, but very knowledgeable and cautious.

Astrid picked up a new blank piece of paper from the writing desk and rolled it into the carriage of the machine, while Miss Rasmusson went on lecturing.

“It is extraordinarily important that, as a dedicated typist, one be not only fast but also well-formulated!”
“And correct,” Astrid filled in.

She was alone on the bench this morning. Usually Zarah, her classmate and seatmate, would sit beside her, but today she’d encountered a necessary delay. They had met when they started the course, and Astrid was glad that she had found someone to associate with in this city, which otherwise felt extremely anonymous and large, unlike Näs. Zarah had other dreams than the secretarial profession; she wanted to become an actress, which is why this day she was on an audition.

“Accuracy is just a part of it, obviously! It need not even be mentioned!”
“Sorry.”
“You’re forgiven, Miss Ericsson. How can you, who are so young, be expected to know everything that is obvious to us older ones, if I do say so! Such as punctuality, for example! You don’t by any chance know when Miss Zarah intends to arrive today, if at all?”
Astrid shook her head uncertainly. No doubt she knew, but she didn’t dare say. Zarah had promised to come on time, but had been delayed anyway. She and her dreams, thought Astrid.
“I’m certain that Zarah has been detained by something exceptionally important.”
“More important than her training in office work? Hardly!”
“Actually it occurs to me that it was something having to do with office work she was supposed to …,” she mumbled. White lies were allowed, weren’t they?

The door to the classroom opened a moment later, and Zarah stepped in with an apologetic smile on her red-painted lips. She was dressed, in honor of the day, in a light dress and wore high-heeled shoes that clicked on the floor when she walked. Astrid paused while Miss Rasmusson turned toward the door.

“Really,” the teacher said ironically, and gave the newcomer a hawk-like stare.
“Hi there!” said the young woman who had just arrived.
“Hi, Zarah. How did it go at the office?” asked Astrid, and winked at Zarah.
Zarah gave her a blank look. “At the office?”
“Yes, why, you were at an office, weren’t you?” Astrid attempted, and stressed the word office so that Zarah would understand.
“I suppose there was an office there, but …”
Miss Rasmusson cleared her throat.
“Perhaps I should remind you, Miss Zarah, that while Miss Ericsson is here for reasons unknown to me to complete her training in record time, you are here, Miss Zarah, because you already have neglected it far too much!”
“But, Rasmusson, I mean, Miss, I mean …,” Zarah floundered, worried.
“Miss Rasmusson, if I may!”
Zarah walked over to the desk beside Astrid’s and took a seat.
“Of course, it’s just a little role in the chorus, but …,”  whispered Zarah
“Get started!” the teacher interrupted, and pointed to the typewriter in front of  Zarah.
When they’d got going, Zarah whispered to Astrid: “But I think I have a good chance of getting it! The director … ”
Miss Rasmusson’s footsteps approached. “Silence!” she barked.

The determined woman walked up and down the aisle, while both the young women typed. For a moment Zarah stuck her tongue out at Rasmusson.

“I saw that!” roared the teacher, and turned toward both of the pupils.
Astrid couldn’t keep from laughing and gave a giggle.
“What’s so funny, Miss Ericsson?”
“Nothing, Miss Rasmusson,” Astrid excused herself and continued typing.
“I didn’t think so,” muttered Miss Rasmusson and resolutely walked over to the desks, after which she tore the paper out of Zarah’s machine. She looked at it skeptically for a few brief seconds.
“Careless! Wrong! Slow! Again!” she screamed, and then wrinkled the paper into a ball and threw it on the floor. When the teacher again turned around and went over to the window to follow the dance of the raindrops across the pane, Astrid quickly snuck a piece of paper she’d finished typing into Zarah’s machine.
“Only by repeating and repeating the same routines again and again and again can one ever hope to become a truly dedicated typist!” Miss Rasmusson’s lesson was heard keeping time with the rain, whichwith the help of the wind threw itself against the glass.
“Geez, Miss Rasmusson, you make it sound so appealing!” said Zarah, with feigned admiration.
“Well, I try--in all humility, of course--to bring to my girls a true devotion to our, to society’s, indispensible and therefore, also, respectable profession; indeed, I don’t hesitate to say it’s a calling!” Miss Rasmusson declared, smiling proudly.
“Many are called, but few are chosen …,” Astrid filled in, and Zarah giggled quietly.
“Admirably well formulated, Miss Ericsson. Your own work?” wondered the teacher, whereupon Zarah giggled even louder.
“The Bible, actually,” said Astrid, with pride in her voice.
“Excellent content, horrid typography!” observed Miss Rasmusson, after which, with light steps, she walked across the floor to see what Zarah had achieved. “Much better, Miss Zarah.”
“Thank you very much, Miss Rasmusson,” replied Zarah, and leaned back on the bench.
“You’re a fast learner. But just one thing: You’ll learn even faster next time if you do the work yourself!”

She ripped the paper out of the machine and transformed it into a new ball, which she threw on the floor and kicked away along the row of desks toward the lecturer’s platform.

“Again! And keep your tongue where it belongs!”
Astrid couldn’t help but giggle.
“You think that’s funny, Miss Ericsson?”
“In Miss Rasmusson’s class? Never!”
“I didn’t think so.”

When the lesson ended a while later and the bell rang, Miss Rasmusson was first out the door. Before she disappeared in the crowd of pupils out in the hallway, she turned around.

“Good afternoon, ladies!” Then she was gone.
Astrid and Zarah remained sitting there.

Soon it would be time, thought Astrid, and felt her stomach. She was almost due. It was near now, maybe only a week or so left, and she had to travel to Copenhagen, for that was decided.

“Is it heavy?” asked Zarah, and ogled Astrid’s stomach, which protruded under her dress.
Astrid nodded. “It will soon be time and I have to travel.”
Zarah looked at her classmate without understanding. “Travel? Can’t you give birth here?”
“No. It’s decided that I’m to have the baby in Copenhagen and that’s why I have to go.”
Zarah smiled. “You know that director, though for now he’s a stage manager ….”
“I understand.”

The last time Astrid saw Zarah, the little room she lived in, and Stockholm that year was in December. The course had finished. Christmas was approaching and Astrid missed her family in Småland. But some time would pass before she returned to their farm, Näs.