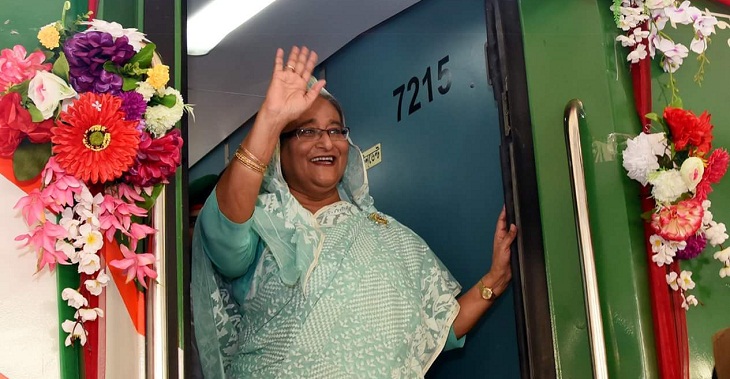 It will take 5 hours and 40 minutes for the new non-stop train service to cover the distance between the capital and the southeastern port city.

The prime minister flagged-off the service at Dhaka’s Kamalapur Railway Station on Saturday, when she inaugurated Bangladesh Railway’s acquiring of 270 new coaches procured by assistance from India and the Asian Development Bank.

‘Sonar Bangla Express’ will be the second nonstop train on this route. The first one, ‘Subarna Express’, started operating in April 1998.

Now, ‘Sonar Bangla Express’ will take the number of trains running on Dhaka-Chittagong route to nine.

The new service will start from Dhaka at 7am and arrive in Chittagong at approximately 12:40pm, every day except for Saturdays.

On its way back, it will start from the port city at 5pm and reach the capital at approximately 10:40pm.

On Saturday, Hasina also inaugurated the new U-loop at the capital’s Khilgaon Flyover from the programme at the central railway station in Dhaka.

Earlier, her motorcade, which left from Parliament, came through the new extension of the flyover to Kamalapur.

From there, the prime minister went to the Pragati Sarani- Banasree Link Road, where she inaugurated another U-loop at the Hatirjheel project.