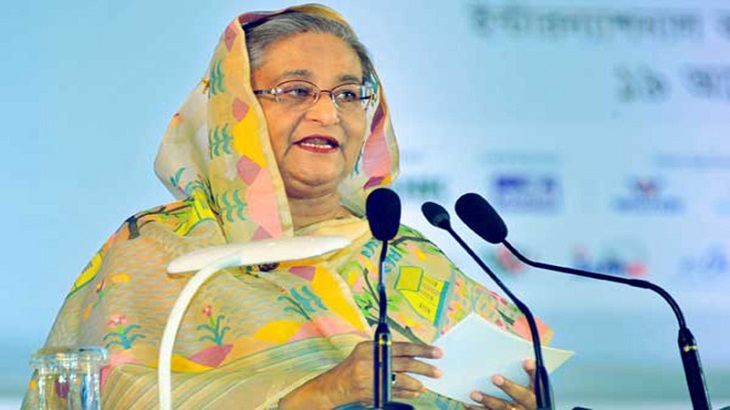 Prime Minister Sheikh Hasina here today laid importance on an education system where students would not neglect agricultural jobs after completing their education and at least be remained involved with the occupation during harvesting season.

"Many people after completing their education in school or college level don't want to go to the agricultural field. So I thought that there should be a system to motivate students of every educational institution particularly of colleges to be involved at least with harvesting of crops," she said.

Sheikh Hasina said this while inaugurating distribution of five lakh home-silos to the people of 63 upazilas of 19 districts from her Gonobhaban residence here today.

The Prime Minister through a video conference with Jhalkathi district inaugurated the programme taken by the Ministry of Food to help the people of disaster-prone district preserve their good grains and seeds during natural disaster.

"We should take steps to involve students with agricultural works as food is very important for us and our economy is based on agriculture. We have to increase agricultural production to sustain our economy," Sheikh Hasina said.

"Mentality of our children should be developed in the way so that none neglect agriculture, rather be more involved with the occupation using modern technology in agriculture after completing their education," she added.

Food Minister Advocate Qamrul Islam, chairman of the Parliamentary Standing Committee on Ministry of Food Kazi Abdul Wadud Dara were present on the occasion while secretary of the food ministry gave a presentation on various aspects of the home-silos.

Principal Secretary to the Prime Minister Md. Nazibur Rahman conducted the meeting while deputy commissioner of the Jhalkathi district, a number of beneficiaries of the project spoke on the occasion from Jhalkathi Deputy Commissioner Office.

The drum-like silos would be able to preserve 56 kg of rice or 40 kg paddy without damaging quality during any cyclone, water surge, flood or any disaster.

Production cost of a silo is around Taka 1,377 but is being given to farmer at a nominal cost of Taka 80, the prime minister said.

Prime Minister Sheikh Hasina said her government, in no doubt, is attaching importance on industrial development. But, measures should be taken to preserve the food stock in any disaster.

The home silo would strengthen the capacity of the families to preserve food during any disaster and important items round the year. They would never suffer from food shortage.

Sheikh Hasina said a vested quarter in a planned manner had created famine in Bangladesh in 1974 taking advantage of our lack of food stocking capacity. After the famine Bangabandhu had taken initiative to construct food silos all over the country. Now we have constructed silos where foods can be kept in stock for two/three years, she said.

The prime minister said, so long Awami League is in power the party would concentrate its endeavour to improve the living standard of the people, meet their demand for food, nutrition and healthcare.

"Our goal is to give people a prosperous life and the government has been implementing many short and long term programmes," she said adding the government is working with this goal.

'Myanmar should take lesson from us'