Muktamoni dies after battle with life 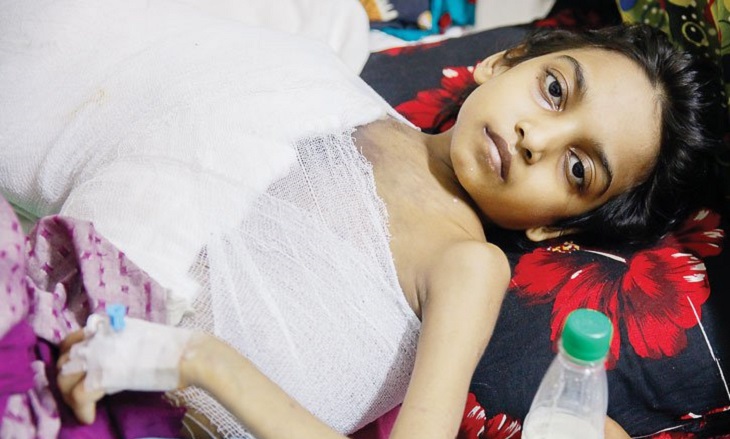 Muktamoni who was diagnosed with a tumour developed in her blood vessels on the right hand died at her residence in Dakkhin Kamar Baisha village in Satkhira on Wednesday morning.

Ibrahim Hossain, father of 12-year-old Muktamoni, said she breathed her last around 8 am at her residence.

“The condition of Muktamoni started deteriorating on Tuesday. Later, we informed Dr Samanta Lal Sen about her condition over phone and he sent a medical team here,” Ibrahim said.

The medical team comprising of Dr Farhad Jamil and Dr Hafizullah visited Muktamoni and informed Dr Samanta Lal about her condition over phone, he said.

Later the visiting physicians prescribed some medicines, he added.

“We took Muktamoni to home on December 23 and since then she remained here,” said Ibrahim.

Meanwhile, Muktamoni will be buried at her family graveyard after Zuhr prayer following a namaz-e-janaza there, said her father.

Earlier on Saturday, her father said that Muktamoni’s condition had been critical for the last few days as her right hand was decomposed completely.

“The infection in her hand has spread all over. Bad odor comes out from her hand when the bandage is pulled off for dressing,” he said.

Muktamoni was under the observation of Dr Samanta Lal Sen, coordinator of Burn and Plastic Surgery Unit of Dhaka Medical College Hospital.

She had been diagnosed with tumour in blood vessels and underwent treatment at the burn unit of Dhaka Medical College Hospital from July 11 to December 22, last year.

On August 12, doctors at DMCH removed a three-kilogramme tumour from her arm after a biopsy showed the tumour in the artery of her hand.

Prime Minister Sheikh Hasina took charges of her treatment after her story was reported in the media.

Muktamoni's parents noticed a tiny red bump on her right arm when she was one and a half years old. For the next four years, the bump grew so much that it began hampering her movement, said her father.

'No more tumours in Muktamoni’s arm'