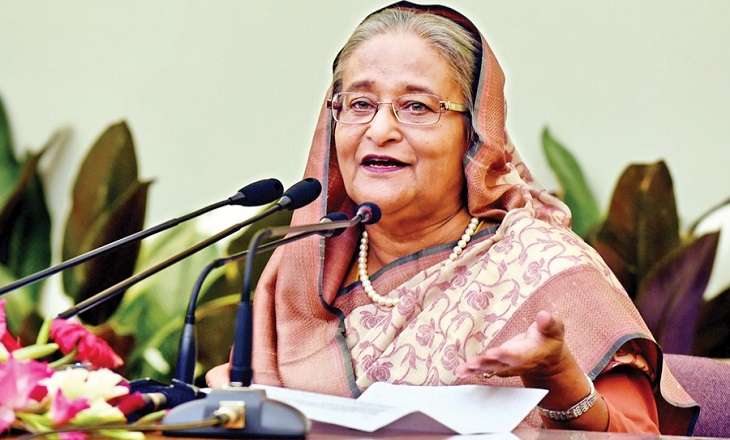 Awami League President and Prime Minister Sheikh Hasina on Monday said the next general election is very important to keep Bangladesh on the higher trajectory of development.

"Bangladesh is now on the higher trajectory of development ... the next election is very much important to continue this development trend," she said.

She said the Awami League government has been able to change the fate of people as it was in power for two consecutive times. "The living standard of people has changed, and it’s changing."

The Prime Minister said her politics is to build the fate of the people of the country not of her own.

She mentioned that if AL forms the government through the next election there will be no poor in the country. "Each and every person of the country will be able to lead a beautiful life as we’ve taken that plan."

Mentioning that numerous development projects taken for the welfare of the country and its people, Hasina said it is inevitable to maintain the continuity of the development.

The Awami League chief briefly described various projects taken for the development of the capital city and said the government will construct 10,000 flats for the people who are living in various shanties to ensure a better life for them.

"They can pay the rent on daily and weekly basis…Not only the rich, but also the poor people can live in flats. The government will construct flats for them, too," she said.

Hasina mentioned that the government will construct elevated ring roads around capital Dhaka for the speedy movement of vehicles. The five rivers around Dhaka will be dredged to increase their navigability, she added.

Regarding the canal in Kamrangi Char which fell prey to land grabbers, the PM directed the Mayor of Dhaka South City Corporation, who was present at the programme, to take a project to recover the canal to ensure sufficient water flow in the canal and improve the beautification through constructing walkways on both sides of the canal.

She mentioned that the government is constructing elevated expressways, metro rails and flyovers to ease traffic congestions in the capital city. "We’re taking various plans for the future. We’ll construct underground railways in Dhaka and a feasibility study in this regard has already started."

Later, she introduced the candidates of Awami League and Grand Alliance and requested the voters to vote for them.