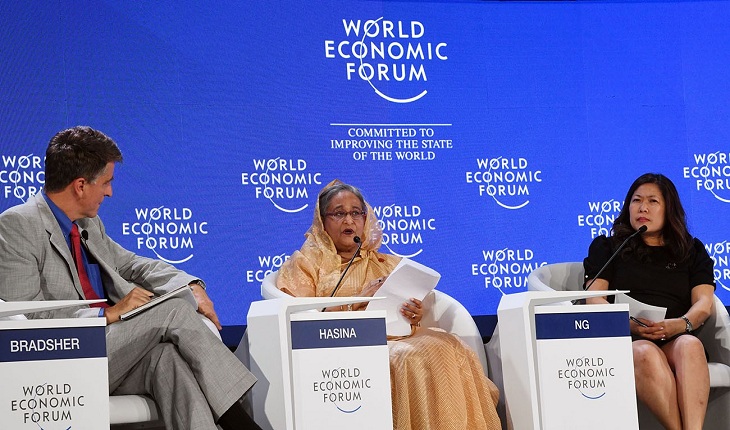 Prime Minister Sheikh Hasina placed a five-point proposal to address the key concerns of smaller communities and weaker economies for their collective takeoff envevours, which she felt crucial for a sustainable global economy.

“We sometimes look just in terms of the capacity of a few large economies or their needs,” she told the World Economic Forum (WEF) Annual Meeting at this Chinese city while placing the proposals.

But, the premier said, “we must address the key concerns of smaller communities or relatively weaker economies for our collective journey and sustainable world”.

Sheikh Hasina joined the session as a panel discussant on “Cooperation in the Pacific Rim” at Dalian International Conference Centre this afternoon.

“Over a five-decade of my journey in politics tells me that any initiative in Indo-Pacific should include the following . . .,” she said pacing the proposals, the first of which suggested creation of an environment of peace- harmony-stability of all countries.

The Bangladesh premier in her second of the proposals urged all to “focus on entire aspects of sustainable development” and in the third one suggested engagement of countries based on mutual trust and mutual respect for mutual benefit.

The fourth proposal stressed focus on wealth creation for all as “development must be inclusive”.

“Create fair competition not rivalry,” the premier said in her fifth proposal.

Sheikh Hasina said when she first assumed office as the premier in 1996 Bangladesh resolved a most challenging issue of sharing Ganges river water with India.

“We amicably delimited our maritime boundary with Myanmar and India. And now, Bangladesh and India are joining hands to uniquely develop our trans- boundary river navigation,” she said.

The prime minister said she always believes that despite differences in size and capacity compared to India, Bangladesh can only secure its peace and security through sustainable development and connectivity.

“We are for a rule based system. Yes, geo-politics will always be a part oflife. But we have to carefully appreciate and balance issues (as) we cannottrade off long-term interests for short-term gains,” she said.

Sheikh Hasina pointed out that a cooperative yet competitive environment among all countries could be the “insurance of their shared prosperity”.

The premier said it was a widely recognized fact that the Indo-Pacific region is the most dynamic zone in the world while simultaneously “Bay of Bengal, home for 1.5 billion people, is a rich and growing region”.

“People living around our Bay of Bengal have so much potential to develop and grow. There is a tendency to look at Indo-Pacific in respect of trade or security issues,” she said.

The premier’s address was followed by a question-answer session, when replying to a query about China’s engagement in implementing several Bangladeshi mega projects with Chinese loan, she said Bangladesh was not worried about the “debt trap” as the deals were appropriately negotiated.

“Many people talk about ‘debt trap’. I have a simple answer. As long as these mega projects are in our people’s interest, has the right pay off and negotiated rightly, we must not be worried,” she said.

Sheikh Hasina said China is involved in some Bangladesh’s mega infrastructure projects while “our external debt is around 14.3% of GDP (which) clearly is a sign of a healthy economy”.

Sheikh Hasina said Bangladesh employed Chinese companies in construction of the longest and challenging 6.9 km river bridge in Bangladesh while “it is fully funded by Bangladesh government”.

“In the past 10 years of our government, I have tried to position Bangladesh in a balanced and objective manner with all our friends globally to optimize our economic and development aspirations,” the premier said responding to another question.

she added that her government always made it clear to all that Bangladesh does not harbor any military ambition as “it is against our values and ethos”.

“During the past term of my government (2014-18), we engaged and deepened our ties with India-China-Japan-US-Europe-Russia seamlessly,” Sheikh Hasina said.

As a fastest growing economy, she said, Bangladesh needs each of our friends for diverse purposes – not certainly at the expenses of another.

“Each of our friends has distinct competence and interest as well. As long as our relationships are based on mutual trust and respect, we all gain for our peoples,” the premier said.

Sheikh Hasina described Bangladesh-India ties and engagements as “organic” saying it was “beyond a few billions of dollars of trade”.

“It is just organic. We have shaded blood together for our (Bangladesh’s) independence,” she said.

On the other hand, the premier said, Bangladesh’s relationship with Beijing was good as well as “China is our partner in mega projects and economic advancements”.

“Our ties with Japan are historic, not just as the largest ODA partner,” she said adding “Russia, another partner who stood by us during our liberation war, is now helping us in our energy security area”.

“We were then an LDC, a small economy. In spite of risks and uncertainty, we agreed to open up to the world. We realized that economic cooperation with the region around and faster integration with global supply chain is the future for Bangladesh,” she said.

The premier predicted that in 10 years from now, Bangladesh is likely to become 25th largest economy globally and “whatever gaps or limitations that= we have, we are ready to correct those. So, we are for ‘open regionalism'”.

She said Bangladesh engages vigorously with India, Japan, China and many others “without any inhibition” and “that is the reason we are also objectively approaching our engagement in BCIM-EC as well as BRI and Indo-Pacific arrangements”.

Sheikh Hasina said Bangladesh’s graduation as a Middle Income Country led it to move for Bilateral FTAs with some countries and “given our size- location-nature-structure, Bangladesh is ready to join an inclusive RCEP”.

“We have also approached ASEAN for their partnership,” she said.