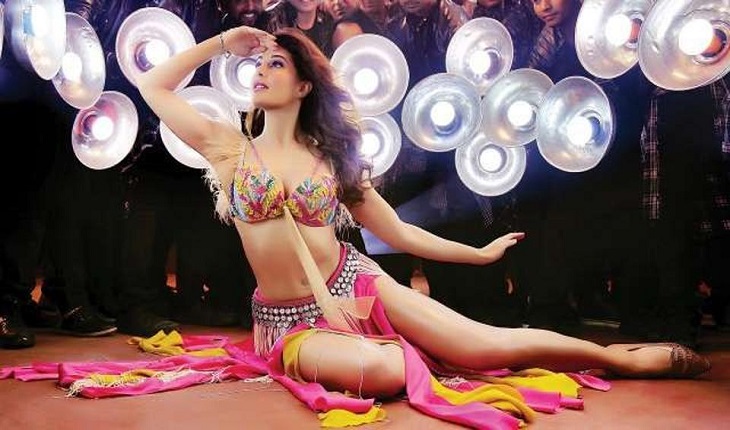 The song that pretty much announced the arrival of dhak dhak girl, Madhuri Dixit, is all set to be recreated in upcoming Tiger Shroff starrer Baaghi 2. And doing the honours is Sri Lankan beauty, Jacqueline Fernandez. The first look of the song is now out.

In the picture, Jacqueline can be seen striking the now-familiar pose of Madhuri looking for her beloved to arrive. Donning a similar dress as the original, Jacqueline is sitting, one hand over her forehead as the other arm is stretched away from her body. She is surrounded by a host of men standing with huge light bulbs. Her wears a multi-coloured bustier with a short pink-and-yellow skirt with thigh-high cuts. She also wears a stone-studded waist band.

The look has been designed by ace designer Manish Malhotra.

Jacqueline is a delight to behold -- her perfectly toned body adds to the visual appeal. The picture has since gone viral and one of the pictures, being shared on Instagram, says that the video song is expected to be out soon.

On the question of recreating a song so iconic, Bollywood Life quoted the actor as saying, ‘That was my first stress, that how can we recreate something so iconic, like is it even possible? It made it lot easier for me when I understood that it is not possible. We’re not trying to match up to what Madhuri Dixit did. We are not trying to match up to what Saroj (Khan) ji did. We are honestly fans, big, big fans of their work. This is honestly, more than anything, a tribute to an amazing and iconic number that they gave to us.’

Baaghi 2 stars Tiger Shroff and Disha Patani in the lead roles and has been directed by choreographer-turned-filmmaker Ahmed Khan. The film releases on March 30.