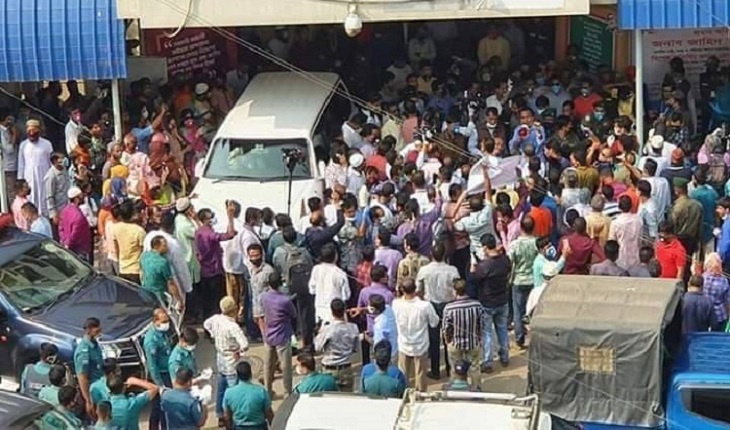 BNP leaders and activists overcrowded at the gate of Bangabandhu Sheikh Mujib Medical University (BSMMU) and outside Khaleda Zia’s residence in Gulshan as their party chief Khaleda Zia was released from a prison cell on an executive order.

Hundreds of leaders and activists of Bangladesh Nationalist Party (BNP) started gathering at the gate of BSMMU and in front of Khaleda Zia’s residence in Gulshan from Wednesday morning to receive the party chairperson.

Khaleda’s family members, lawyers and some senior BNP leaders, including its secretary general Fakhrul, had also been there.

However, Mirza Fakhrul and other senior BNP leaders repeatedly urged the party leaders and activists with a loudspeaker to move away from the BSMMU premises, but their calls went unheeded.

Though many of the BNP leaders and followers were seen wearing masks and other personal protective equipment, some others had no safety equipment, causing a matter of worry as such gatherings are against experts’ suggestion of maintaining social distancing to prevent the spread of coronavirus.

Such a gathering posed a serious health risk to the patients at the country’s premier hospital and the journalists present there since coronavirus has already spread the country.

Journalists were seen expressing their deep concern over their safety as BNP leaders made it difficult for them to discharge their professional duties by taking position around them.

Even, Khaleda had to wait 10 minutes on the ground floor of Cabin Block of the hospital to get into her vehicle due to the overcrowding.

She, however, left the hospital around 4:20 pm for her Gulshan residence in her vehicle escorted by the party leaders and activists.

He said BNP leaders and activists were aware of the current coronavirus situation, but they took a risk of their lives and health driven by emotion. “We had tried to convince them to leave the area but failed. They defied our instructions, but we understand their feelings and love for our leader.”

After the government announced to free Khaleda on Tuesday, Fakhrul called upon BNP leaders and activists not to gather Bangabandhu Sheikh Mujib Medical University and hold back their emotion for the safety of Khaleda and other patients at the hospital amid the spread of coronavirus in the country.

“We call upon our leaders and activists to remain calm and exercise restraint and avoid any gathering. You please play a responsible role in this regard,” the BNP leader said.

He also asked the party rank and file also not to throng near Khaleda’s Gulshan residence as it may cause harm to her. “

Khaleda Zia’s family recently submitted an application to the government seeking an executive order to have the BNP chief released for her treatment in London.

Her brother Shamim Eskandar, sister Selima Islam, and her (Selima’s) husband Dr Rafiqul Islam met Prime Minister Sheikh Hasina and made an appeal for her release through the executive order.

Under the circumstances, the former prime minister’s sentences have been suspended as per section 401 (1) of Criminal Code of Procedure (CrPC), said Law Minister Annisul Huq on Tuesday.

Khaleda has been in jail since she was convicted in the Zia Orphanage Trust corruption case on February 8, 2018.

She was found guilty in another corruption case later the same year, though her party claims both cases are politically motivated.

Khaleda was receiving treatment at BSMMU since April 1 last year.

Indictment hearing in 8 cases against Khaleda on Nov 6