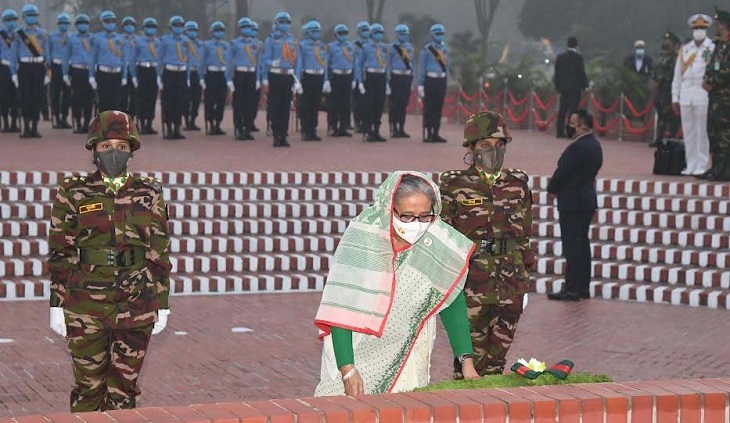 Prime Minister Sheikh Hasina today paid rich tributes to the martyrs of the Liberation War by placing wreath at the National Memorial in capital’s outskirts Savar this morning, marking the 51st Victory Day.

After placing the wreath, she stood in solemn silence for some time as a mark of profound respect to the memories of the martyrs of the Great War of Liberation in 1971.

A smartly turned out contingent drawn from Bangladesh Army, Navy and Air Force presented a state salute on the occasion when the bugles played the last post.

Flanked by senior leaders of the party, Sheikh Hasina, also the President of the ruling Awami League (AL), laid another wreath at the National Memorial as the party chief.

Younger daughter of Father of the Nation Bangabandhu Sheikh Mujibur Rahman and Prime Minister’s younger sister Sheikh Rehana was also present there while the Awami League paid glowing tributes to the war heroes.

Later, leaders of other political and socio-cultural organisations placed wreaths at the National Memorial to show the respect to the memories of the war martyrs.

The nation is celebrating the 51st Victory Day, the most precious day of the Bangalee people, today as the country was liberated from the Pakistani occupation forces on the day 50 years back after a nine-month-long bloodstained war.

On December 16 in 1971, Bangladesh was born as an independent country under the leadership of Father of the Nation Bangabandhu Sheikh Mujibur Rahman at the cost of supreme sacrifice of three million people and the honour of 200,000 women.

The celebration of the Victory Day this year has added a new dimension as the day is being celebrated coinciding with the two giant events - birth centenary of Father of the Nation Bangabandhu Sheikh Mujibur Rahman and golden jubilee of the country's independence.

Along with the government, different socio-political, educational and cultural institutions, and organisations have chalked out a series of programmes to celebrate the day.

As part of the state programmes, the prime minister will be present at the parade in the National Parade Square at 10:30pm, while President Md Abdul Hamid will take salutes and inspect the parade as the chief guest.

She will also unveil a logo inscribed with “Mujib’s Bangladesh”, the brand name of Bangladesh Tourism there and release the memorial postal stamp on the occasion of the birth centenary of Father of the Nation and the golden jubilee celebrations of the country’s independence.

In the afternoon, the prime minister will administer an oath to the nation as part of the two great celebrations.

She will also join the ceremony of the birth centenary of the Father of the Nation and the golden jubilee of the country’s Independence at the South Plaza of the Jatiya Sangsad.