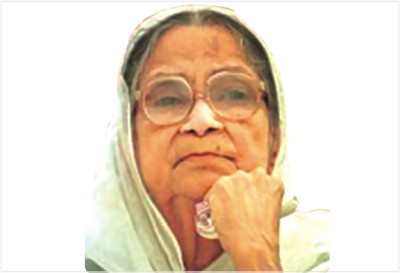 The 106th birth anniversary of late poet Sufia Kamal is being observed across the country on Tuesday.

A pioneer in movement for women emancipation, Sufia Kamal was born on June 20, 1911 in Shayestabad Nawab family in Barisal. Her father was Syed Abdul Bari and mother Nawabjadi Syeda Sabera Khatun.

He said Sufia Kamal had struggled throughout his life for the emancipation of women from prejudice.

She had active role in all progressive movements in the country, Hamid said, adding that her struggle was for establishing a society with equal rights of men and women.

He prayed for eternal peace of the departed soul of the poet.

Prime Minister Sheikh Hasina in her message said, “I convey my profound respect to the memory of Begum Sufia Kamal, one of the pioneers of progressive, democratic and women emancipation movements in Bangladesh, on the occasion of her 106th birth anniversary.”

The Prime Minister said Sufia Kamal was the image of a traditional Bengali woman and an affectionate mother.

On the other hand, she played an uncompromising role in every movement in Bangladesh, she added.