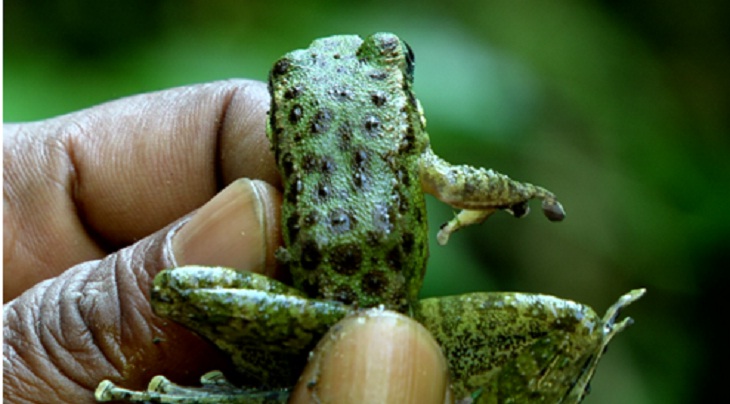 During a series of surveys carried out during 2016- early 2017 in areas of mixed-evergreen forest along the river Karnaphuli of Chittagong Hill Tracts a rare species of frog named Gerbil's stream frog was spotted and identified for the first time in Bangladesh.

Dr. Anisuzzaman Khan, Chief Consultant of River and Life Questprogramme together with the researchers, Mr. Fazle Rabbi, Mr. Shakil Aronno, Mr. Hossain Sohel and Mr. Rajib, located the live and camouflaged specimen from a steep rocky hill stream  of Barkal   reserve forest   on 16 January 2017. Detail features of the specimen, morphometric and habitat composition was recorded in both video and still forms.

The frog has large and prominent barred discs in fore limbs, smaller in hind toe tips,skin is highly granular having dark brick blotches engraved on green back and the ventral part is white. This beautiful stream frog is found and distributed in the high gradient, torrent stream hill streams of Mynamar and India. It is native to northern and northeastern India, Tibet (China), and Myanmar. This species has been recorded only from Dihang-Dibang Biosphere Reserve and Mouling National Park (Arunachal Pradesh) in India.

It is associated with streams and riparian vegetation within tropical evergreen forest. It exclusively occurs on boulders and bedrock in and along fast-flowing, clear-water forest streams, from lowlands to highlands (100m 1700m asl). Breeding takes place in streams.

There is little available information on egg deposition or larval ecology.After its discovery here, Bangladesh becomes a new geographical range of occurrence of the species. Research is required on the species’ taxonomy, population status, life history and ecology.

The new Bangla name suggested for the frog as “JarnaPari” by Mr. kabir Bin Anwar based on its habit and habitat.