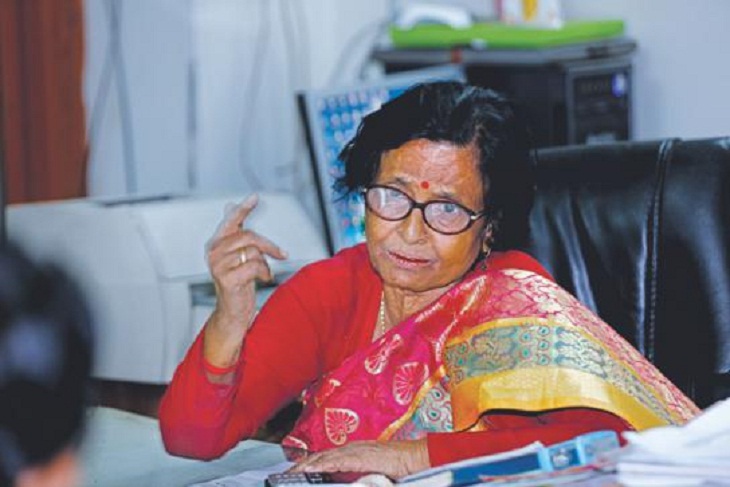 How often you get to know the heroics of female freedom fighters? Not much often.

After 46 years of the country's getting liberated through a nine-month bloody war, women's role in 1971 is largely stereotyped either as “carers” (who assisted the freedom fighters and refugees in many ways) or “birangonas” (who were sexually abused by occupying Pakistani forces).

The valiant role women had played in different battle theatres of the Liberation War deserves a much bigger canvas.

But there were fighters like Ashalata Baidya, then commander of an all-women freedom fighters' group that fought valiantly during 1971.

This guerrilla group used the riverscape to fight and disrupt the movement of Pakistan armed forces in the greater Faridpur region.

"In the month of May (1971), some 45 young girls, got together at Lebubari Primary School for war training. That school compound in Gopalganj's Kotalipara turned out to be our camp for the rest of the war days and we fought from there," recalled Ashalata.

The group of woman guerrillas that Ashalata commanded was part of famous Hemayet Bahini, a fierce guerrilla force named after its leader and organizer Mohammad Hemayet Uddin, Bir Bikrom.

Hemayet Uddin was a Havildar, a non commissioned officer equivalent to a sergent, of the then East Bengal Regiment of Pakistan Army, but he managed to build his force mostly with local youths.

It took a lot of courage for Ashalata, then a 15-year-old girl and an SSC candidate (the exam that could never take place in 1971), to organize other young women in Kotalipara and inspire them for guerrilla training.

Ashalata explained how it all started for her.

"After coming out of jail in 1969, Bangabandhu Sheikh Mujibur Rahman came to Gopalganj to address a huge rally. A ninth grader in Narikelbari High School, I was the only woman who got on the platform and addressed the rally in Bangabandhu's presence in response to a call from the dais that any woman can say something. That event gave me enormous fame and I became known in the whole of Gopalganj."

"When the war broke out and Hemayet bhai started scouting for freedom fighters," Ashalata continued, "he asked me one day to look for women willing to take armed training."

Now in her early 60s, never married Ashalata, went down memory lane, to recollect that "those were challenging times. I went door-to-door to look up my fellow female students from my school and managed to convince some to join the Lebubari guerrilla training camp."

Ashalata still remembers all 45 names of her comrades, which include two of her siblings--Shantilata Baidya and Usharani Baidya, and also, among others, Minotirani Biswas, Shulekha Roy, Dolyrani Baroi, Tahmina Khatun, Rekha Rani Gun and Fatema Rahman.

Fatema Rahman, who retired as a Bangladesh Betar director a few years back, had just completed her Masters in Bangla literature from Dhaka University in 1971 and went back home in Gopalganj. Fatema told The Daily Star how Hemayet Bahini opened a camp at Johorerkandi and how a few male guerrillas from that camp used to visit them at Lebubari and trained them to operate the WWII vintage 303 rifles, and to charge grenades.

Fatema, who had later moved to India and served in Kallyani in Sector 8 under the leadership of then Major Abul Manzoor, recalled the courage of Ashalata and her female freedom fighters' team that had a successful battle at Ramshil-Poisarhat. Fatema's husband Motiur Rahman is a valiant freedom fighter too, who fought alongside Major Jalil in Sector 9.

Both Ashalata and Fatema recalled the names of Hemayet Uddin, Babul Akhter and Kamalesh Bedoggo as their armed trainers, Dr Phillips and Dr Shyamacharan Baidya as first aid trainers and Dolyrani Baroi as nursing trainer.

Swarnalata Folia, another fighter of the Ashalata force, was a ninth grader at Narkelbari High School. She recalled with fond memories how they threw explosives from a strategic place by the river and overpowered Pak forces and their local collaborators.

Now staying at her son's Gazipur residence, Swarnalata said, "We were all in all then. We could operate the 303 (rifle), throw grenades and homemade bombs, remove bullets lodged in our comrades' bodies, treat and nurse them applying both indigenous knowledge and whatever scanty modern medical facilities we could find, and managed food for ourselves at the Lebubari camp."

Majority of the coverage of women's role in the 1971 war has centered on women as victims. Or alternatively, as carers--i.e. they collected and distributed foods, clothes in the refugee camps, helped freedom fighters to hide or treat and nurse the wounded ones.

But Ashalata, Swarnalata and Fatema's experiences and heroics show, women fought in the war in so many different ways in the face of great odds and personal danger.

Women were guerrilla fighters, mothers, nurses, wives, informants, daughters, spies and so much more. They fought, spied, smuggled weapons, and trained--actions traditionally attributed to men. Their sufferings may have been manifold, but so were their achievements and contributions.

War heroes include those women who have supported the valiant freedom fighters with food, shelter, funds; who have nursed the wounded and hid weapons risking their own lives. They also include those who have willingly given their sons to war, who have lost their loved ones and even worse, been subjected to sexual abuse but survived to tell their stories.

Ashalata, daughter of her homemaker mother, Sharalamoyee, and a local landlord and schoolteacher father, Haripada Boidda, learnt how to operate firearms and was trained in guerrilla combat.

She recalled the Poisarhat battle that they fought in September, 1971.

"We took position in the bunkers dug on both banks of the river Arial Kha's branch at Poisarhat. The advancing Pak force on board a launch and accompanying boats of Rajakars (collaborators) got destroyed in our attack. Hemayet bhai, though, was hit by a bullet and another freedom fighter, Ibrahim, got killed." But the casualties in the enemy side were enormous and they were totally routed.

After independence Ashalata went on to complete her Bachelors and Masters in Bangla literature and set up cooperatives, built a high school after her mother. She formed a non-government organization-- Surjomukhi Sangstha--soon after she completed her Masters. Surjomukhi helps people set up cooperatives, including farming cooperatives, and small businesses, and is also involved in organizing small loans.

Some recognition came in their way with various socio-cultural organizations honouring Ashalata and other female freedom fighters. A full-length feature film is now being made on the heroics of the women guerrillas as well as Hemayet Bahini.

"Ashalata and her group's role are being featured prominently in our film - Pothe Pothe Juddho," said Shimul Mahmud, a co-director of the upcoming movie.