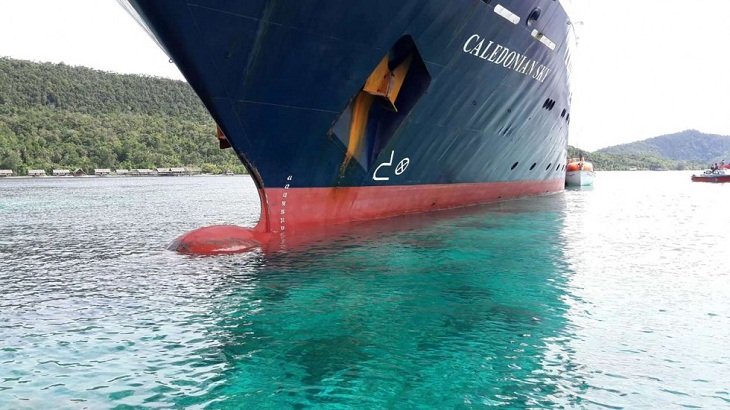 Indonesia summoned the British ambassador Friday after a cruise ship on a voyage organised by a London-based company smashed into coral reefs in a popular tourist spot and caused extensive damage.

Raja Ampat in eastern Indonesia is one of the most biodiverse marine habitats on Earth, and attracts intrepid travellers and divers to its palm-fringed islands surrounded by coral and fish.

The accident happened this month when the 4,200-ton ship smashed into the reefs at low tide around Kri, one of hundreds of small islands in Raja Ampat, after taking tourists on a bird-watching expedition.

The boat, which was carrying 102 passengers and 79 crew, was grounded on the reefs and only refloated later on a high tide. Numerous attempts to free it using a tug boat failed, causing further damage to the corals.

The incident in West Papua province infuriated the government, who say the British captain could face criminal charges, while marine researchers believe it will take decades and cost millions of dollars to restore the corals.

On Friday Coordinating Minister for Maritime Affairs Luhut Panjaitan, a senior figure in the cabinet who is close to President Joko Widodo, summoned British ambassador Moazzam Malik to Jakarta.

After the meeting at Panjaitan's office in the capital, Malik told reporters he had a "very good discussion" with the minister.

"I'm disappointed to learn about the damage to this coral reef in West Papua, as we are with any environmental incident that occurs in Indonesia or anywhere else in the world," he said.

"We hope the matter can be resolved quickly between the Indonesian authorities and the company that is responsible for this accident and was managing the ship."

However, Malik also noted that the ship was in fact owned by a Swedish company. The tour operator Noble Caledonia, which organised the voyage to Indonesia, is based in London.

"He (the captain) attempted to break free from the reefs and made the damage even worse even though he was ordered to stop," he said, adding it could take up to 100 years to restore the corals.

Authorities have expressed anger that the Bahamas-flagged vessel left Indonesia and sailed on to the Philippines without waiting for a full damage assessment to be completed.

Noble Caledonia has apologised for the accident and said they are working to reach a settlement with the government.