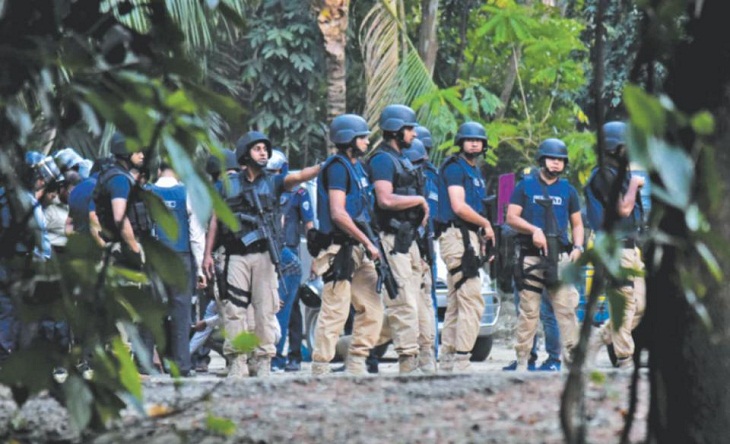 Four suspected militants including a woman presumed to be operatives of Neo-Jamaatul Mujahideen Bngladesh (neo-JMB) were killed today on the outskirts of this port city as police raided a hideout of theirs ending a nightlong siege, officials said.

"Two militants were killed in suicidal explosions and another two were killed in gunshots during the encounter at Sitakunda," Chittagong police's additional superintendent Reazaul Masud told BSS.

He said the encounter began after a night-long police siege to the hideout of the neo-JMB, which staged the deadly July 1, 2016 attack on a Dhaka Holey Artisan caf, killing 22 people including 17 foreigners.

They said the terrorists, who visibly were living at the house in the guise of ordinary tenants, hurled grenades and powerful bombs wounding two SWAT members as police opened fire 6.24 am.

The wounded policemen are now being treated at Combined Military Hospital of Chittagong.

"Police launched the operation ending the siege after 6 am when the militants started blasting grenades explosions rocked the entire neighbourhood for nearly 10 minutes," a journalist reported from the scene.

"Twenty ordinary residents of the house including female and children of seven families were virtually trapped inside as the operation was underway but they came out of the building as the encounter ended," Counter-terrorism unit's deputy commissioner Abdul Mannan Abdul Mannan said .

Earlier, police cordoned 'Chhaya Nir" after arresting a couple and their son with arms and explosives from another Neo-JMB hideout' at the neighbourhood on Wednesday evening.