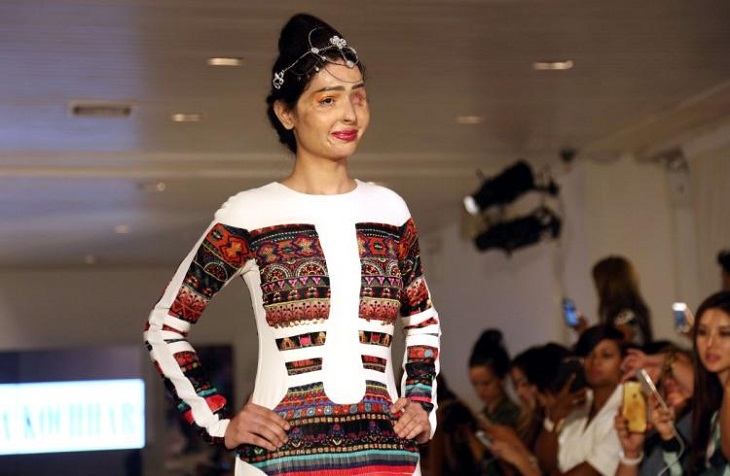 An Indian model scarred in an acid attack challenged perceptions of beauty as she strutted down the runway at New York Fashion Week to promote a ban on the sale of corrosive substances used to maim thousands of women and children each year.

A smiling Reshma Quereshi, 19, opened the FTL Moda show on Thursday to applause in a long-sleeve, white gown with embroidered appliqués by Indian designer Archana Kochhar during her first trip to the United States.

The buzz and glamour of the event was a world away from Allahbad, India, where she suffered severe facial burns and lost an eye two years ago after being attacked with sulphuric acid by her estranged brother-in-law and two men.

Quereshi never thought she would be going abroad, much less modelling in New York.

After enduring numerous skin graft surgeries and contemplating suicide, she met the founder of Make Love Not Scars, a group that helps survivors of the gender-based crimes.

Quereshi is the face of the group's online video campaign, which has been viewed by 1.3 million people and led to her appearance in New York.

"I couldn't believe it was happening to me," Quereshi said about the trip through a translator. "In that moment I felt extremely happy."

She said she hopes her turn on the catwalk will inspire hope and confidence in other acid attack survivors and spur countries to regulate the sale of cheap and easily available acids.

"No one else understands what an acid attack is except the survivors themselves," she said. "I do not want this to happen to anyone else."

About 1,500 acid attacks are reported each year, but Jaf Shah, the executive director of the London-based charity Acid Survivors Trust International (ASTI), said the real number is many times higher.

"There are whole swathes of regions across the globe where acid attacks are occurring but are not being recorded," he said in a telephone interview.

"It is not reported for fear there might be reprisals from the perpetrators due to the fact that survivors and their immediate family have no confidence in the police or the judiciary to take action."

India has the highest number of recorded attacks, which are often a form of revenge by jilted husbands or rejected suitors. ASTI describes it as a global phenomenon that occurs in countries ranging from Afghanistan and Iran to Nigeria and Colombia.

Shah said limiting the sale of acid, punishments for attackers, and compensation and care for survivors, are needed. People like Quereshi speaking out is also very important, he said.

"Victims coming forward are defying the perpetrators of the attacks," he added.

Increasing diversity on the catwalk has been an aim of FTL Moda. The production company has featured models with disabilities, in wheelchairs, on crutches and amputees.

Australian model Madeline Stuart, who has Down Syndrome, made her runway debut at the FTL Moda show last year.

"I think this is a powerful tool," said FTL Moda founder Ilaria Niccolini. "I think it can make a change for the better."

She was a model