First time Bangkok: a microguide to the Thai capital 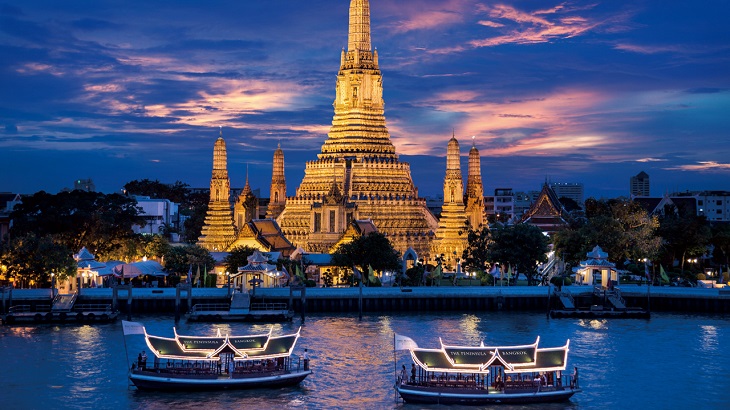 Scratch Bangkok’s surface and you’ll find a city with mega-malls minutes from 200-year-old homes, with temples sharing space with neon-lit strips of sleaze, and where streets lined with food carts are overlooked by restaurants perched on skyscrapers. And best of all, as Bangkok races towards the future, these quirks will continue to supply the city with its unique brand of Thai-ness.

Population: around 8.2 million
Visitors per year: around 26.5 million
Daily budget: US$30 to $100, plus accommodation
Best time of year to go: December/January is both the coolest time of year in Bangkok as well as the peak tourist season

Ko Ratanakosin and Thonburi
The artificial island of Ko Ratanakosin is Bangkok’s birthplace – a logical starting point for your visit – and the Buddhist temples and royal palaces here, including Wat Phra Kaew & Grand Palace, and the enormous reclining Buddha at Wat Pho, comprise some of the city’s most important and most-visited sights. Cross Mae Nam Chao Phraya (the Chao Phraya River) to Thonburi to visit Wat Arun, one of the only Buddhist temple sights in Thailand that visitors are allowed to climb on.

Banglamphu
Leafy lanes, antique shophouses, hectic wet markets and golden temples convene in Banglamphu – easily the city’s most quintessentially ‘Bangkok’ neighbourhood. It’s a quaint postcard picture of the city that used to be, that is until you stumble upon Th Khao San, the intergalactic backpacker melting pot that’s anything but traditional. If you’re not staying here, come in the cool evenings and hit the Th Khao San Market for backpacker essentials, or grab a beer at one of the strip’s fun bars such as Hippie de Bar.

Chinatown:
Although generations removed from the mainland, Bangkok’s Chinatown could be a bosom buddy of any Chinese city. The streets are crammed with vendors, gaudy yellow-gold and jade shops, and flashing neon signs in Chinese characters. With this over-the-top vibe, it’s hardly a surprise that Chinatown’s own Wat Traimit is home to the world’s largest solid-gold Buddha statue. And with so much life on the streets, open-air restaurants such as Nai Mong Hoi Thot and the famous Th Phadungdao Seafood Stalls make Chinatown Bangkok’s best ‘hood for street food feast.

Siam Square
Multi-storey malls, outdoor shopping precincts and neverending markets leave no doubt that Siam Square is the heart of Bangkok’s commercial district. In addition to shopping, which hits its overwhelming peak at megamalls such as MBK Center and Siam Paragon, don’t miss the charming Thai architecture and art museum that is Jim Thompson House.

Riverside, Silom and Lumphini
Although you may not see it behind the office blocks, high-rise condos and hotels, Mae Nam Chao Phraya forms a watery backdrop to these linked neighbourhoods. History is still palpable in the riverside area’s crumbling architecture, evident in the nearly 140-year-old Mandarin Oriental, arguably the city’s most famous hotel. Heading inland, Th Silom is Bangkok’s de facto financial district by day, while after dark it transforms into a nightlife destination with districts such as Bangkok’s ‘gaybourhood’ on Soi 4, Th Silom, and Patpong, one of the most famous red light districts in the world. Nearby Th Sathon is the much more subdued embassy zone, and is home to nahm, arguably Bangkok’s best Thai restaurant. And right next door is Lumphini Park, central Bangkok’s premier green zone, best visited in the cool morning or afternoon.

Sukhumvit
Japanese enclaves, French restaurants, Middle Eastern nightlife zones, tacky bars: it’s all here along Th Sukhumvit, Bangkok’s unofficial international zone. This is modern, cosmopolitan Bangkok, manifest in fun bars such as Badmotel and WTF, and excellent international restaurants such as Jidori-Ya Kenzou and Little Beast.
Other areas
You can hardly say you’ve been to Bangkok without a visit to Chatuchak Weekend Market, located north of the city. Allegedly one of the word’s largest markets, it’s an overwhelming assemblage of vendors that unites commerce ranging from exotic fish to vintage sneakers.

Cool, yet modest clothing. Bring a scarf or sarong to cover legs and arms when entering temples.
Getting Around

Bangkok has two airports. Suvarnabhumi International Airport is Bangkok’s primary international air hub and is located 25km east of the city centre. From/to Suvarnabhumi, transport options include metred taxis, the Airport Link train and city buses. Don Muang International Airport, Bangkok’s low-cost terminal, is north of the city. From here, transport options include metred taxis and two airport bus lines.
Bangkok’s public transportation network is continually growing, but it is still relatively young, and getting to certain parts of the city – particularly the older areas such as Ko Ratanakosin and Banglamphu – remains extremely time-consuming. The best strategy is usually to combine a longer trip on the BTS or MRT with a short taxi ride.
The elevated BTS/Skytrain (bts.co.th) is probably the most efficient and convenient way to get around central Bangkok. Bangkok’s MRT/Metro (metro.co.th) is also convenient, although not quite as expansive as the BTS.
Outside peak hours, Bangkok taxis are a great bargain.

Bangkok is generally a safe city and incidents of violence against tourists are rare. Commit the following to memory and you’ll most likely enjoy a scam-free visit:
If you aren’t a gem trader or expert, then resist the urge to buy unset stones in Thailand. Otherwise, you’ll find yourself getting sucked into a complicated scam in which you’ll pay an exorbitant price for costume jewellery.
gnore any ‘friendly’ local who tells you that an attraction is closed for a Buddhist holiday or for cleaning. These are set-ups for trips to a bogus gem sale.
Say goodbye to your day’s itinerary if you decide to go with any tuk-tuk driver willing to take you around for 20B. These alleged ‘tours’ bypass all the sights and instead cruise to all the fly-by-night gem and tailor shops that pay commissions.
Refuse any taxi driver who quotes a flat fare, which will usually be three times more expensive than the reasonable meter rate. Walking beyond the tourist area will usually help you find an honest driver.

Don’t say anything critical about the Thai royal family.
Do dress respectfully at royal buildings and temples.
Don’t wear your shoes indoors.
Do try to avoid conflict or raising your voice with locals.
Don’t touch another person’s head

Book a room at a boutique hotel a couple months in advance, especially for December/January.
One month before you leave, apply for a visa at the Thai embassy or consulate in your home country if you plan to stay longer than 30 days.
A couple weeks beforehand, book a table at nahm or lessons at a Thai cooking school.

Story of Shoaghi: first Bangladeshi woman to travel to 135 countries

How to go to Sajek Valley

From April, tourists can stay at Taj Mahal only for 3 hours