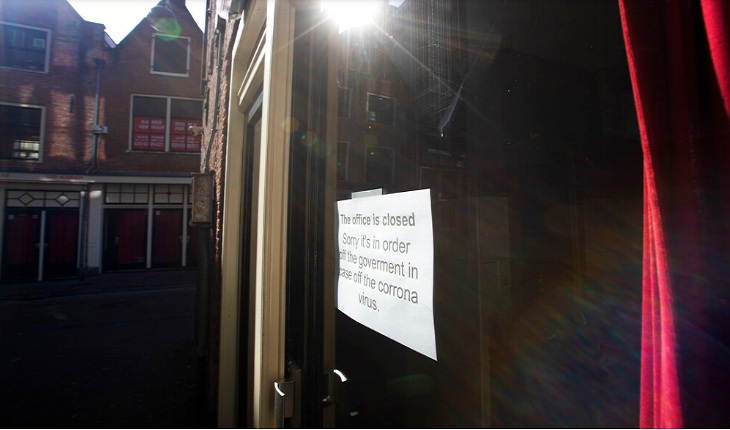 It's 7 p.m. on a Friday night, a time when Aurel Johannes Marx's three-room brothel on the edge of Berlin would normally be preparing for its first customers. Sex for sale has long been a staple part of the German capital's freewheeling nightlife. But amid concerns over the new coronavirus, even the world's supposedly oldest profession is suffering a sudden slump.

At the "Lankwitzer 7" brothel, with its soft red light and bawdy paintings on the wall, disinfectant dispensers have been installed next to the washbasins. Marx say he's ordered staff to hot-wash all towels and sheets, and open the windows more often to let the warm, sticky air escape.

"Over the past week business has gone down by 50%," Marx said, blaming the decline on the general drop in nightlife that's occurred since the virus arrived in Berlin.

The city has registered 332 confirmed cases of COVID-19 so far. Several dozens infections have been traced to bars and clubs.

"There are those who are withdrawing from the business entirely at the moment for safety reasons," Bleier Wilp told The Associated Press. Others are requiring that customers disinfect themselves, she added — a measure that medical experts say is unlikely to effectively stop the spread of the virus during close physical contact.

For most people the virus causes only mild or moderate symptoms, such as fever and cough. But for some, especially older adults and those with existing health problems, it can cause more severe illness, including pneumonia.

The vast majority of those who are infected recover from the new virus. According to the World Health Organization, people with mild illness recover in about two weeks, while those with more severe illness may take three to six weeks to recover.

One worry is that many sex workers are young and may not be too concerned about infection, while some clients are over 50, putting them at greater risk of complications. Reconstructing chains of infection — as authorities are trying to do when a case is confirmed — could also be tricky. "In the business it's normal to interact anonymously and to use aliases," said Bleier Wilp. "It's a problem."

Another problem is that prostitution is financially precarious. Unlike regular employees, most sex workers won't benefit directly from the half-trillion-euro package of loans the German government is making available to companies facing ruin because of the coronavirus outbreak.

"Sex workers are usually self-employed, not employees," said Bleier Wilp. "That means, they bear all the risks themselves"

Some sex workers may be able to rely on savings for several weeks, she said. "But it becomes more difficult if the crisis lasts for longer. Then many, particularly those who do it full time, may have to seek help."

Bleier Wilp said a provision in Germany's infectious disease protection law might allow self-employed sex workers to apply for compensation due to loss of earnings. The clause has never been tested before, however, and those who have worked on the legal fringes may be disinclined to seek official help: by some estimates, more than two-thirds of sex workers aren't registered.

By Saturday, authorities in Berlin had ordered the temporary closure of all entertainment venues, including brothels. Whether all sex workers will heed that order, or risk their and their client's health to make ends meet, was unclear.

In the Netherlands, Amsterdam's famed Red Light District was similarly hard hit after the government on Sunday night ordered the closure of schools, bars and restaurants for three weeks and made a point of mentioning that sex clubs also were affected.

By Sunday night, the normally packed canal-side streets and narrow, cobbled alleys that are normally a tourist magnet were largely deserted. On Monday, the windows where scantily clad sex workers pose to attract customers were largely empty. Some had signs taped to the glass saying: "The office is closed" due to the coronavirus restrictions.

Greece's closures also affected brothels, while in Poland, where brothels are officially illegal, "massage" parlors were affected by the shutdown. Geneva, where the U.N.'s European headquarters is located, closed all non-essential stores and services as of Monday evening, including barbers and "prostitution activities."

Before the closure, Berlin brothel owner Marx acknowledged that the women working at his establishment were hurting financially.

"Everybody wants more money, not less. But that's the situation at the moment, it's developing rapidly," he said. "I can't do anything to change that.

"At some point it will be over, and when it's over things will work out again," he added.

Women bear the brunt of climate change in Angola